This month’s speaker will be Tom Mirenda who will be with us from Hawaii at 7:00PM PT on November 11, to lead us through his month long orchid safari to many different locations throughout Africa. Tom has been cultivating plants since his early childhood. Originally trained as a marine biologist, he moved to Hawaii in his early 20s where he worked on the trophic [nutritional] relationships between the denizens of coral reefs in the northwestern Hawaiian Islands (Midway and French Frigate Shoals). 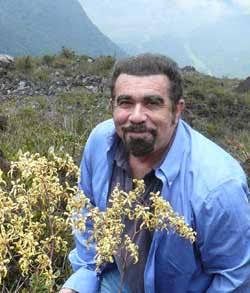 Realizing he was better suited to horticultural pursuits he took positions at the New York Botanical Garden, Brooklyn Botanical Garden and at the Greentree [Whitney] Estate in Long Island where he cared for a first class orchid collection. Eventually, Tom accepted the Orchid Collection Specialist position at the Smithsonian Institution in Washington DC where he cultivated and curated its 8000+ plant collection for 17 years. In better times, the Smithsonian collection was used to create months long educational exhibits visited by millions of visitors each year. Last fall, Tom left the security of the Smithsonian to take a leadership position at the Hawaii Tropical Botanical Garden, a jewel on the lush Hamakua coast just north of Hilo. What Tom found there was an orchid paradise where myriad spectacular orchids of all types, both lowland and montane, species and hybrids, seem to thrive when simply placed thoughtfully in the trees in the landscape.

Tom has contributed articles to ORCHIDS magazine for many years and has developed an international following as a writer, speaker and advocate for orchid conservation. Three years ago Tom co-authored “The Book of Orchids” with two scientists from Kew. He has done speaking tours in the British isles for the last three summers and presented on conservation topics at the last three World Orchid Conferences and several IOC and AOC conventions. Tom was a founding member of the North American Orchid Conservation Center and continues his support of orchid conservation there and around the world.

Tom Mirenda believes that ultimately the concept of growing orchids in a garden settings will be a viable model for orchid conservation world-wide and that it is only with the cooperation of botanical garden professionals, commercial growers, academia and committed orchid collectors and backyard growers, that orchids will survive the vicissitudes of climate change.