The Diablo View Orchid Society meets the second Thursday of each month at 7:00 pm  at the Contra Costa Water District Building Board Room located at 1331 Concord Avenue, Concord, CA

The October Meeting starts at 7:15 pm PDST at the Contra Costa Water District Building Board Room.  Doors open at 6:30 pm for Show and Tell setup and conversation. 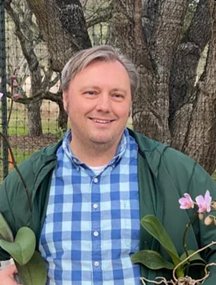 Jim has been growing orchids for over 20 years. Over that time his interests have revolved around Phalaenopsis and other Vandaceous species along with many other genera. He has been breeding orchids for over 10 years with a particular interest in exploring the genetics of various Phalaenopsis species in simple hybrids (primary and near primary) with a goal of bringing fragrance back into standard hybrids that have the grace and floriferousness of the species in their background. More recently he has focused on propagating Angraecoid species while dabbling with a few hybrids. Although he has grown orchids under lights for many years, he is currently exploring species and hybrids that can be grown outdoors in his Coastal Monterey Bay area garden. Those requiring cozier environs are grown in a small greenhouse.

Jim began his orchid-judging career at the Great Lakes Judging Center in Ann Arbor, MI and is currently a judge at the Pacific Central Judging Center. He has held several leadership positions in his local orchid society, the AOS, and at both Judging Centers.

In his day job Jim works as a raspberry breeder for Driscoll’s in Watsonville. His focus is on “prebreeding” which involves developing molecular tools to increase efficiency in their breeding program as well as discovering novel traits in wild or un-adapted plants and transferring the genes responsible for those traits into already-adapted plant genomes to improve the disease resistance and flavor (among other traits) of the resulting plants.  Jim has a B.S in Horticulture, and a M.S. and Ph.D. in Plant breeding from Michigan State University.

​In his talk to us this month, Jim will discuss basic genetic and breeding concepts as they pertain to orchids. He will share his experiences and observations on some of his work to explain these concepts with examples from his breeding program. Having a better understanding of these concepts can help
those interested in preserving species or growing hybrids to make informed decisions on acquiring plants for their collection or propagate them. 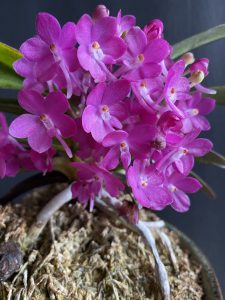 It is a CLOSED GROUP page, to which only members can post orchid related pictures and comments. To become a member use the button below and someone will contact you and invite you to the group.