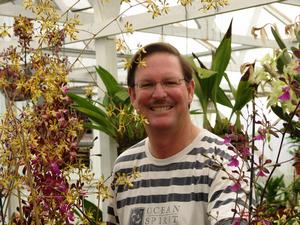 Our December speaker will need no introduction to most of you. Fred Clark is one of the best known figures in the world of orchids. Owner of Sunset Valley Orchids, Fred will be with us on Zoom on Thursday December 10, at 7:00 PM to share his expertise on one of his favorite subjects “Catasetinae Species and their Cultivation”

Fred has been growing orchids for 42 years and has been hybridizing for 38 of those years. With over 34 years as a professional grower and manager in the horticultural industry, Fred applies those skills at his orchid nursery near San Diego. He is also an Accredited Judge in the Pacific South Judging Region.

Fred is a passionate grower whose curiosity about orchids is broad and varied. Although developing Cattleya hybrids has been his sustaining interest, he is also actively creating new Paphiopedilums, Australian Dendrobiums, and some others to be named if they work out! His pioneering work in Catasetum inter-generic hybrids has led to the development of several notable hybrids, most recently the grex, fredclarkeara “After Dark”, which produced “…the blackest flower ever witnessed”. His plants have received hundreds of quality awards from the American Orchid Society. “After Dark” alone has received over 100 awards worldwide.

Those of you who watched the documentary “The Judge, The Hunter, The Thief and The Black Orchid” will remember Fred was one of the leading orchid personalities featured.  If you have not had a chance to see it, it is still available along with our other archived files.